A downloadable prototype for Windows

This is a postmortem of a game that never made it over the finish line. FFFLOOD (with a various number of F’s throughout the years) has been a living prototype all the way throughout the 10-year existence of Vlambeer, that we never managed to get quite right. What follows is its story.

In the prehistoric days of Vlambeer, 2010, when Rami & I were just about ready to found the company, Rami asked me a question: “Hey, after Super Crate Box, do you have any other ideas?” Around that time I’d been noodling around with a simplified take on tower defense, which would become the prototype known as FFFLOOD . A game about defending a power core from tremendous amounts of alien lifeforms. As we got the company up and running, the prototype stayed on the backburner for a bit. We released Super Crate Box and Radical Fishing, and landed the pitch to make Serious Sam: the Random Encounter. It wasn’t until after the main development of LUFTRAUSERS in 2013 that that prototype popped into our minds again.

an early prototype of FFFLOOD

THE PROBLEM WITH TOWER DEFENSE

The idea for FFFLOOD became to do a Vlambeer take on what we saw as the problems with tower defense; games that often were a bit too slow for our tastes, and that often punished you for making tiny mistakes spread over a long period of time. I especially didn’t like how losing a tower early on could make you slowly lag behind, eventually resulting in defeat way after the initial mistake.

With FFFLOOD we knew a few things had to be done: first of all, this was a Vlambeer game, it needed to be dumbed down and actioned up. The player wouldn’t be strategizing, we’d put them in a constant state of near-panic. We wanted a game where you wouldn’t carefully consider your positioning, but instead hold down a button and drop a whole line of ten-ton turrets straight from orbit. You didn’t shoot bullets, you shot guns. Cannons blazing, thousands of enemies active all at the same time. 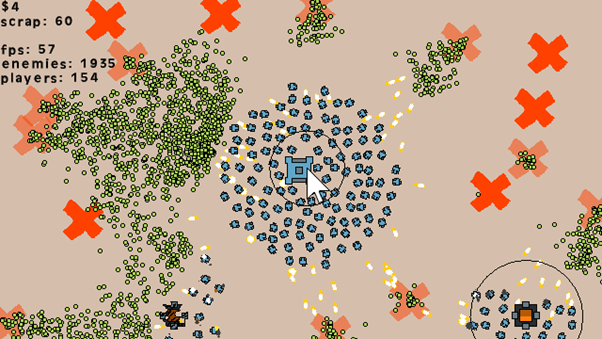 a 2016 prototype of FFFLOOD, featuring a beautiful giant cursor

Second of all, we wanted to tackle the “your mistakes bite you in the ass later” problem. For this we introduced the scrap mechanic. When losing a tower, you instantly got back its full cost in scrap. Scrap would slowly (or rapidly, with the right equipment) convert back into cash. No matter how big your loss, you could eventually work your way back into the green. A player at Wave 10 would always have the same resources as anyone else at that point. The interesting question was: are those resources in the form of cash, scrap, or towers? Are those towers in the wrong position? Drop a bomb on them and recover the scrap. Did enemies obliterate your left flank? No worries, build some more scrap-converting factories on the right and you might just make it through this wave.

Early prototypes had a physical player character, but we quickly decided to ditch that. You simply embodied a cursor that dropped ten-ton turrets from orbit. We were going for a starship troopers vibe, but most of all inspiration came from John Ringo’s terrible Posleen War pulp novels. These books are simply incredible, not a single bullet is fired without describing its caliber, and every single explosion is measured in megatons. Incredible, rich source material. We could ridicule military fetishism and the exploitation of natural resources, and have a fun game all at the same time.

In the end, FFFLOOD’s design suffered from always being in a state of change. Ideas kept evolving, and we never quite got it to where it needed to be to get into full production. Prototypes were fun, but also a bit complicated. Ideas like the scrap mechanic, or the fact that the area around your mouse actively repaired turrets, or that you’d need to build near ever-moving Cores (also a good mechanic in that it’d make your defenses irregularly shaped and unpredictable) only made the game more complicated. We tried a lot of simple but unusual things, and all of that together resulted into something quite alien to players and would probably require heavy tutorialization.

Ultimately we envisioned FFFLOOD as a kind of roguelike-structured action defense game. Players picked a loadout, went into a run, and dropped tank-sized turrets onto a planetary surface in a flurry of corporate greed and intense alien slaughter. We had designed different playable classes, like the Architect, who can teleport whole swathes of turrets or enemies around, and the Bombardier, who takes a less subtle but more direct approach with heavy explosives. Each class would have their own tech tree, and players could freely create a loadout with different turrets to try out. In the full game we imagined a cool overlaying progression system, where completing runs or specific challenges would unlock more equipment and classes to try, eventually resulting in some sort of devious bossfight and looping mechanic like we did with Nuclear Throne.

As we continued through the years, there were also more doubts about the theming and what exactly the game would be saying. There’s a quote by filmmaker François Truffaut that goes “There's no such thing as an anti-war film”, and I felt like the same quote could be applied to games. In making a game that parodies military fetishism, we’d still be making it look really badass. This didn’t necessarily hold us back from working on it, but it is something that added to the pile of doubts and questions that stopped the game from ever going into full-on production. At some point we did start getting a team together, and Roy Nathan de Groot did some great concept art and sprites for the prototype and especially helped refine the interface a lot, but our timing was never quite right and the project always ground back to a halt.

In the end, in whatever form it took, FFFLOOD never really worked out for us. Ideas constantly evolved too fast to solidify into a full game, and as we grew as people throughout the decade, so did this game and the ideas behind it. Not everything always needs to be completed: we’re grateful for lessons we learnt and things we tried, and will take that knowledge forward in whatever we work on in the future.

too bad this game was lost, it is good

Maybe there's way you can release these? Just...maybe?

great game but it gets frustrating in the end (atleast for me) but overall brilliant.

This is a lovely little tower defense strategy type of game. I can see a lot of potential with this prototype. Fantastic work, despite its shortcomings. I am sorry this never made it to fruition. The blend of Rouge-like elements with tower defense is executed upon very cleverly (enough to where, in my opinion, in could become its own sub-genre of game).

There's a file called FFFLOOD_README. All the things you need to know are there

very nice, and enjoyed it but, WHAT IS HAPPENING

Update it please, its so good but needs polish

Work on this! Cool idea

It's so sad the game was such a good starting point ! I think the mashup roguelike X tower defense hasn't been used yet. I clearly see various loadouts with mechanics like 'hungry',  'pay to charge' turrets...

I would love to try to extend / push this prototype ! I mean if Vlambeer is ok !

If anyone is interested DM me, I'm a unity dev !

Anyway was a cool proto glad I tested it !

Realy good game i was in wave 21 when my game freezed, sooo much enemys
good game, it was a little difficult to understand the types of turret, it shold have a tutorial.

A good game until I have reached wave 10 and my pc has crashed because of the GameMaker Studio engine.

I leave the full gameplay until the terrible moment.

This game was actually quite fun, wish it was taken further.

are you guys planning on publishing the source code of this?

I'm gonna give this a go, sad to hear you two are breaking up but I'm sure you both can continue to make games separately that are great.

Wow, that's interesting!
Can you build web or mac version? Wanna play, but don't have a PC

I want it on Linux xD

I second him. We need linux.

it detect me a  "TrojanDownloader.AutoIt.avn". Maybe there is a reason of why it's free.

Reply
The Peace Arcade1 year ago(+3)

Any relation between the name of this game and the Flood from Halo?

Very nice and interesting game, never get bored.
only flaws the graphics are very simple and there is no sound for the rest is a beautiful game =).

I always hear of these projects that devs work on forever and never quite make it to fruition, and then are cancelled and never heard of again.
I ask myself "why don't they just release what they have instead of hiding it away?"
Usually its harder than just releasing what they have, but its really nice to see some good devs actually drop some unfinished project instead of staying quiet, good stuff!

Thanks for the read. I have great memories of playing and watching your games, and I wish you all the best in what you go on to do in the future!

Great insight into a cool project!

Reply
Cornix The Third1 year ago(-1)

Looks actually fun, with some nice juicy sounds and work on graphics, keep it up

Sadly, this is part of their farewell. The studio is moving on to new endeavors.

Great backstory and super fun game! Love the work you all do. Can't wait to see what's next, but this will certainly hold me over for a bit!

There isnt any "next"

Luckily there's ULTRABUGS, coming out in the future.

Sad that this couldn't be done, as it is what I have been looking for years but I am grateful for your write up and the ability to play a prototype!

Great insights!  It is really fun and illuminating to see your team's thoughtful design processes.  Thank you for sharing!

Love to see this write up. Thanks folks 👍🏾